Home » all recipes » The Best Ever Vegan Cinnamon Rolls 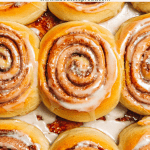 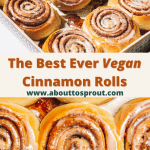 Truly the best vegan cinnamon rolls you will ever have. These sweet rolls are fluffy, big, and perfect! Filled to the brim with a cinnamon sugar filling and topped with a simple vanilla bean glaze soaking into every single bite you take. This indulgent treat is perfect for any occasion, any time of year.

This easy cinnamon roll recipe requires no stand mixer and can be done all by hand. I actually suggest working with he dough by hand because it is so soft and comes together from kneading in a very short amount of time.

The ingredients are simple and most of you likely have most of them in your kitchen! These cinnamon rolls require a little bit of patience, so I suggest not straying from the recipe, but if you do, please leave a comment and let me know what you did! Here is what you will need to make this vegan cinnamon roll recipe:

Type of flour to use

The trick to keeping these rolls incredibly fluffy and soft is bread flour. If you're familiar with my Best Ever Soft Sandwich Bread recipe, then you will know I love and prefer using bread flour to create a light and fluffy dough. We need a higher protein flour to be able to develop enough gluten to give the dough a light and elastic texture, ensuring you end up with fluffy rolls.

Room Temperature Butter. Make sure to use room temperature butter in the filling. You may have seen some recipes call for melted butter, but this leads to the filling seeping out before the rolls even bake.

Don't overheat your milk. If you milk is scalding hot, let it cool before adding the sugar and yeast. You are looking for bath water warm, between 105-115 degrees F. If you don't have a thermometer, dip your finger in the milk. It should feel warm, but not hot, just like bath water!

Flour your work surface well. This isn't an overly sticky dough, but to get a smooth dough, make sure both your surface and rolling pin are floured well.

Cinnamon sugar mixture should be rubbed really well into the softened butter. This ensures it is well combined.

Use bread flour! Bread flour makes all the difference in these vegan cinnamon rolls. You will achieve a soft dough and the fluffiest rolls you have ever eaten.

Of course there is a make ahead option! Once you complete the second rise, place the tightly wrapped baking dish in the fridge overnight. I suggest using plastic wrap. The next day, remove the baking dish from the fridge and let the cinnamon rolls rise in the oven with the light on for 30 minutes. Once finished rising, remove the dish from the oven and preheat the oven to 350F. Remove the plastic wrap and bake as directed in the instructions. These can be prepped up to one day ahead of baking.

If you make these Best Ever Vegan Cinnamon Rolls, please let us know by leaving a review and rating below!

And make sure to sign up for our newsletter so you never miss a new recipe and follow along on our Instagram, Pinterest, and Facebook for more About to Sprout goodness! Don't forget to tag us on when you make a recipe at #abouttosroutrecipes

for more sweet vegan recipes, check out the following: 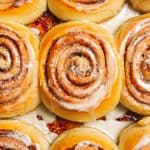 If you have leftovers (blasphemy!) wrap them up in place in the fridge up to 2 days. These vegan cinnamon rolls are best reheated on a baking sheet in the oven at 350F for 5 minutes. If you wish to freeze baked cinnamon rolls, wrap them super well in plastic wrap and put them in a freezer safe bag. They are good in the freezer for up to 2 weeks. To reheat frozen cinnamon rolls, unwrap them and place them on a baking sheet at 350F for about 10 minutes or until warmed through.
« Grilled Peach Panzanella Salad with Shallot Vinaigrette