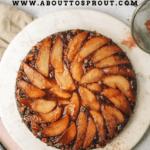 I have been so pumped to share this caramel pear upside down cake with you all! A quick caramel is the base to make everything sticky, ooey, and gooey. It's not a traditional caramel, but a quick made mixture of coconut sugar, maple syrup, vegan butter, salt, and a tad of cinnamon. I have tried it using coconut oil rather than vegan butter, but I promise you it is not the same as vegan butter.

Aside from the gooey caramel topping, there are some many other layers to this easy cake. It looks pretty, yes, but it truly tastes even better. Can you even imagine that? Think of a sticky bun and then think of a chocolate cake and put them together and you get this vegan pear upside down cake! 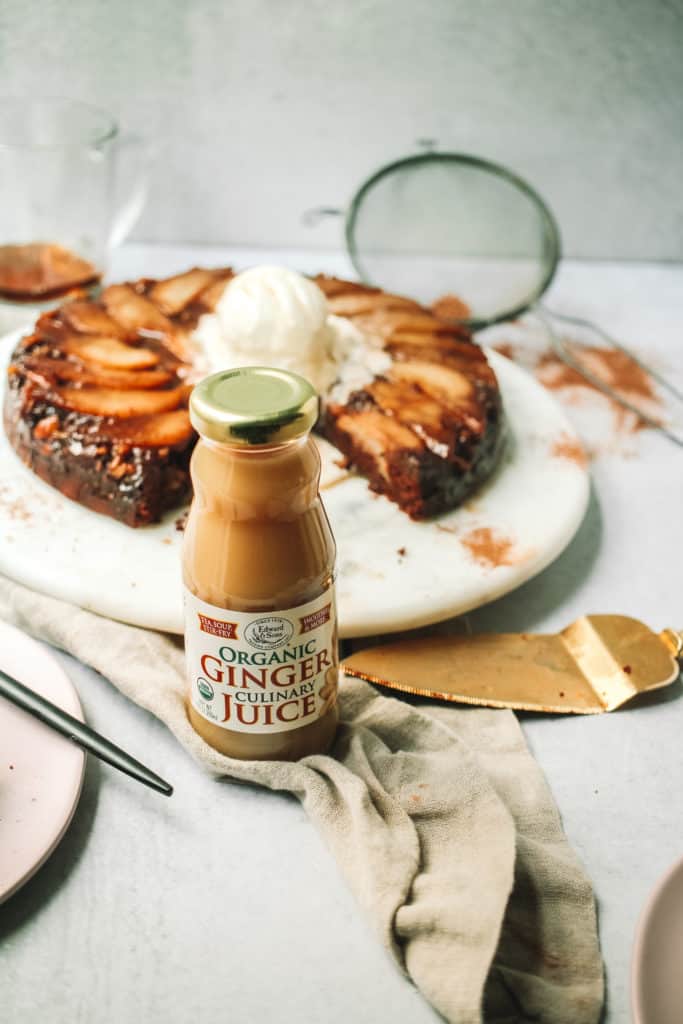 For this recipe I used Edward and Sons Ginger Juice to get a true spiced chocolate cake. Let me tell ya, it's a spicy one! However, it's also perfectly sweet, sticky, and a bit salty, all of my favorite things in one bite. With a super simple recipe to follow, it really is a fail proof cake. 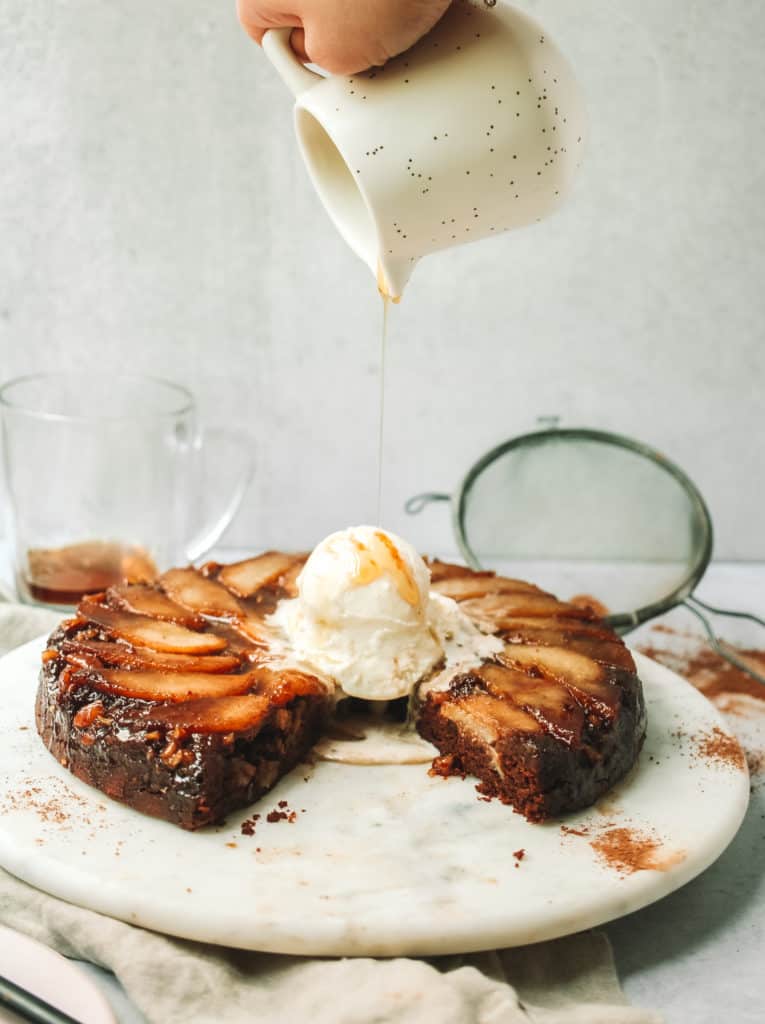 HOW TO MAKE PECAN CARAMEL PEAR UPSIDE DOWN CAKE TOPPING

To bring the gooey part of the cake to life here's what you do. Begin by melting vegan butter in a small sauce pan until just melted. Remove it from the stove and add coconut sugar, maple syrup, salt, and dash of cinnamon. Pour your caramel on the bottom of your cake and evenly spread it. Peel, core, and slice your ripe, but not soft pears and layer them in a spiral on top of your caramel. Chop your pecans and add them on top of the pears.

In a medium bowl, sift all of your dry ingredients. In a separate large bowl, whisk together nut milk, coconut sugar, avocado oil, vanilla, and Edward and Sons Ginger Juice. Alternatively, if you don't have ginger juice, use orange juice for a non spicy, citrus chocolate cake! Add your dry ingredients to wet and pour batter on top of your pecan pear caramel mixture. Bake for 40 minutes, remove from oven and let cake cool almost completely until you flip it. Caramel may ooze, but thats the beauty of a gooey caramel pear upside down cake! 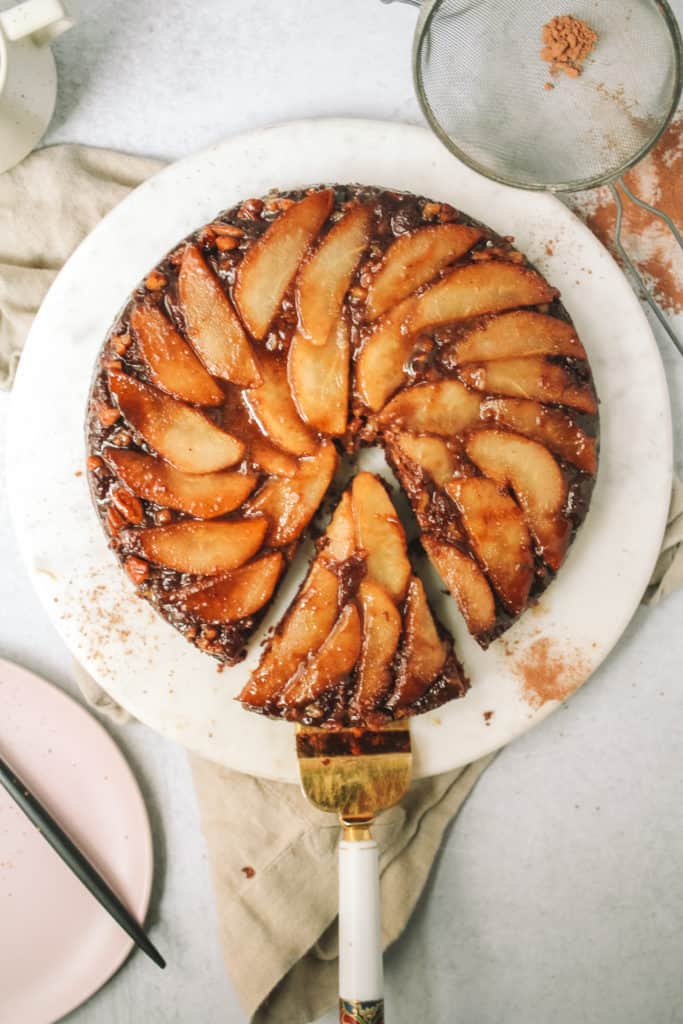 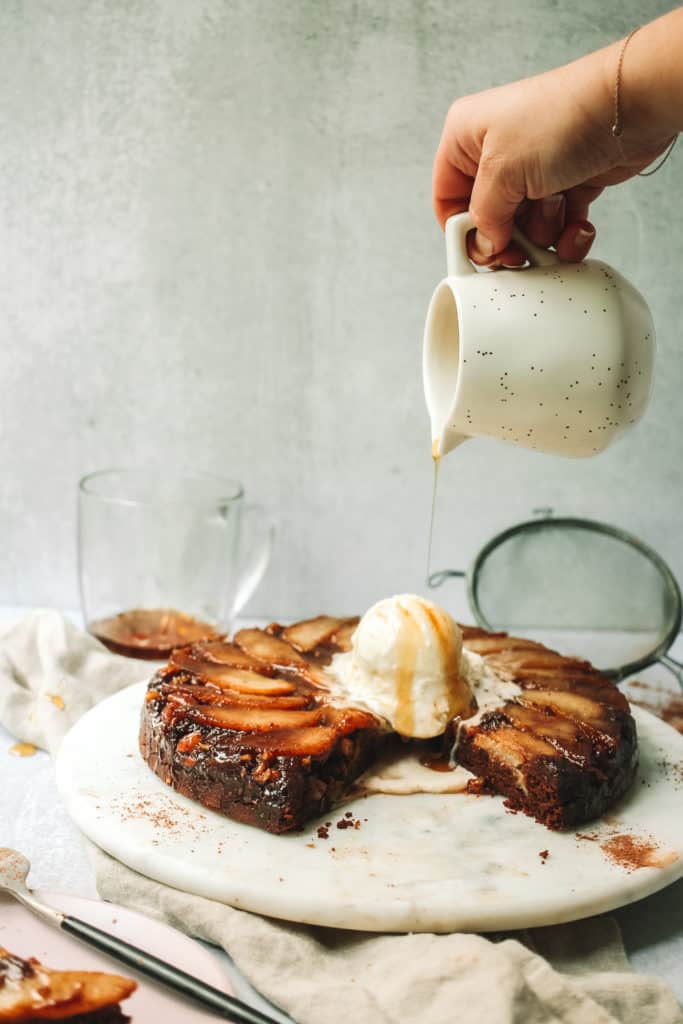 If you aren't adding a scoop of your favorite vanilla ice cream on top with a drizzle more of maple syrup what are you even doing?! 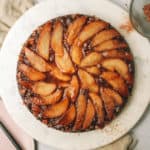 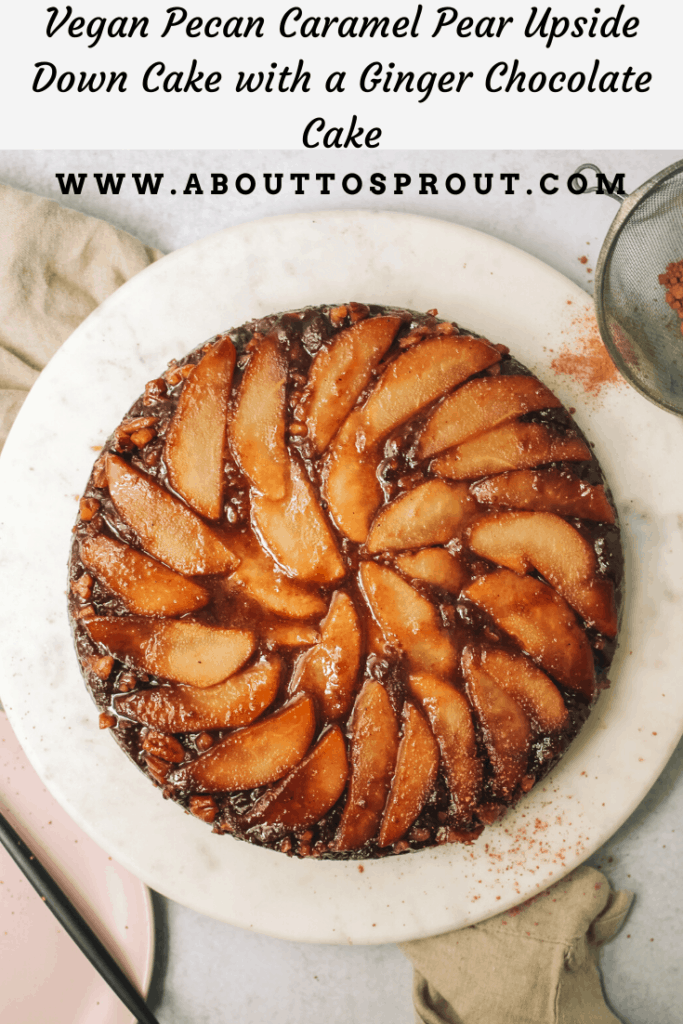